"A story that reminds kids that, with determination, anyone can be a champion." -- Child Magazine

"Adler's story and Widener's drawings are a triumph in themselves." -- The San Diego Union-Tribune 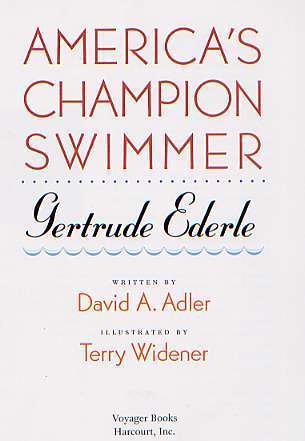 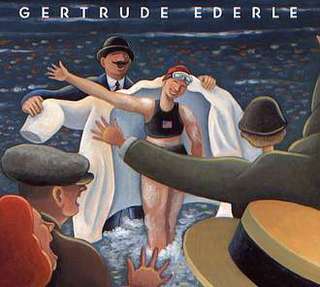 From School Library Journal
Kindergarten-Grade 4-This picture-book biography covers the life of Gertrude Ederle, highlighting her world-record breaking, long-distance swims. In 1926, women were thought to be the weaker sex, but this indomitable young athlete broke the men's record by two hours when she swam the English Channel. Fascinating tidbits about her 21-mile swim will entice readers: "She floated on her back and ate chicken and drank beef broth." For her victory, she was rewarded with a ticker-tape parade and a letter from President Coolidge calling her "America's Best Girl." More information about her life is appended. In the acrylic paintings, characters with large bodies and small heads, suggesting Depression-era art, are set on impressionistic backgrounds. The pictures of the swirling, rough water add fluidity and motion, and the perspectives that show the small figure of the swimmer in the vast sea capture the immensity of Ederle's endeavor. Attractive formatting and large type make this story of achievement as effective and as inspiring to read aloud as this team's Lou Gehrig: The Luckiest Man (1997) and The Babe & I (1999, both Gulliver).
Jean Gaffney, Dayton and Montgomery County Public Library, OH
Copyright 2000 Reed Business Information, Inc.-- 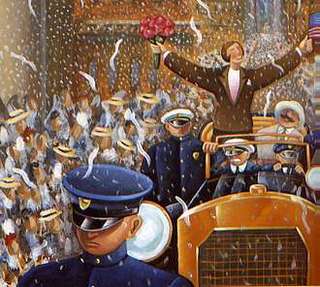 A School Library Journal Best Book of the Year

A CHILD Magazine Best Book of the Year

A San Francisco Chronicle Best Book of the Year

ABA's Pick of the Lists

An ALA Notable Children's Book

From Publishers Weekly
The team behind The Babe & I and Lou Gehrig: The Luckiest Man here abandons the baseball field for the chilly, choppy waters of the English Channel, which Ederle swam across in 1926. The first woman to accomplish this feat, Ederle also beat, by almost two hours, the existing men's record. Widener's stylized acrylic paintings again creatively evoke a bygone era, while Adler's direct yet descriptive narrative establishes the historical context. He notes that in 1906, the year of Ederle's birth, women in most states could not vote: "Many people felt that a woman's place was in the home," writes Adler. "But Gertrude Ederle's place was in the water." Readers will warm to the heroine, a city kid who was taught how to swim only after she, at age seven, fell into a pond and nearly drowned. Text and art offer a compelling, in-depth account of the adult Ederle's crossing of the Channel, as she swam for more than 14 hours from Cape Gris-Nez, France, to Kingsdown, England, despite driving rain, strong winds, high waves, a powerful current--and her trainer's directive to quit. An exciting story, well told; kids will dive right in. Ages 6-9. (Mar.)
Copyright 2000 Reed Business Information, Inc.-