Study Guide for "Don't Talk To Me About The War"

The very first line of the book, “Don’t talk to me about the war,” tells the reader that Tommy Duncan, the story’s main character, is not interested in adult-like issues. He soon lets the reader know he’s more interested in baseball and the popular radio shows of the day. As the story progresses and he gets more involved in his mother’s health issues he is forced to take on more responsibilities. His interests slowly change. He matures.
----- Give examples that indicate how his interests change as the story progresses.
-----Which Tommy would you prefer as your friend, the Tommy at the beginning of the book or the Tommy near the end of the book?

Mr. Simmons first appears in the book on page 2. The author placed him at the table with Beth to keep the conversation between Tommy and Beth from moving too quickly. Mr. Simmons is described as a well-education student of history. He makes frequent appearances in the story at Goldman’s Coffee Shop. We also meet him on page 112 at his place of work. His job is a surprise to Tommy and meant to be a surprise to the reader. He’s a doorman.
----Why is Tommy surprised?
----Do you know people whose work surprises you? Why do their jobs surprise you?

On page 55 before Tommy and Charles join a stickball game they leave their books and jackets between two cars, a Ford and a Hudson. Of course, since this is fiction, the author could have named any two cars – Buick, Chevrolet, Chrysler, or Cadillac. He chose to make one of the cars a Hudson because while it was a popular car in the time of the story, 1940, Hudsons are no longer being manufactured. The author wanted the mention of the Hudson car to be a reminder to the reader that this is 1940, not today. Even Tommy’s favorite team, the Brooklyn Dodgers, is a reminder that this story takes place in the past. Tommy lives the Bronx. He could have been a New York Yankee fan, but by being a Dodger fan he reminds the reader that this story happened some time ago.
----There are many instances in the book where the author subtly reminds the reader of that it’s 1940. How many more references can you find?

Sarah who first appears on page 6 of the book is a European refugee. She makes the war in Europe personal for Tommy and Beth.
----What do you know about Sarah?
----What do you think it would be like to have a friend who has Sarah’s tragic experiences?

----On page 165 we learn that Tommy’s friend Charles was named for Charles Lindbergh. What’s the great irony in this? 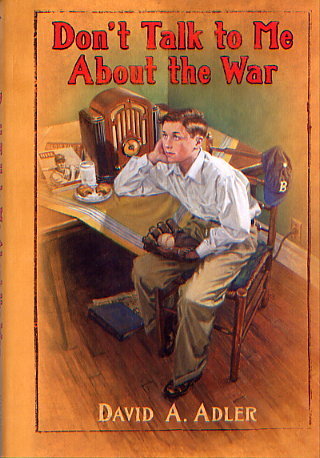 TEXT OF A BRIEF INTERVIEW WITH DAVID A. ADLERTell me about your new book. What was your inspiration for the book? ---- Writing Don't Talk To Me About The War was a real process. It began with my fascination with the time between WW I and WW II. I had already written one very successful book of historical fiction about that time period, The Babe and I, a picture book featuring an encounter with Babe Ruth. The book won may awards including a Golden Kite Honor Award and the California Medal. Don't Talk To Me About The War began for me with the idea to fashion a story on one boy and his family's reaction to Roosevelt's fireside chats. After all, so much has been said and written about those talks, how families gathered by their radios to listen. Well, how did they react? That idea proved unworkable. The chats were too infrequent, only about once every six months. Instead I began with the 1940 rescue at Dunkirk, two views, one of a girl wrapped up in the horror of the trapped soldiers and her best friend Tommy who feels it's all happening so far away, across the ocean, and means very little to him. But more is happening in Tommy's life. There's baseball and his favorite team the Brooklyn Dodgers, radio, his friend Beth whose mother recently died and whose father works in the press room of the New York Daily Mirror, their friend Sarah's escape from Nazi-held Europe, and Tommy's mother's medical issues. It's a coming-of-age story as Tommy assumes more responsibilities at home as his mother becomes less able to care for Tommy and his father. Was any research involved? Oh, yes! I began with a calendar. I always knew what day it was in my story: May 23, 1940; May 24, 1940; May 25, 1940. And as I wrote I had that day's newspaper on my desk. If I wrote the Dodgers won that day, they did. The score and the details of the game in the book are accurate. The radio schedule and the weather is also accurate. The news reports about the rescue at Dunkirk are accurate, too, even the slow pace the full news reached the United States. Also, for Tommy's mother's illness I consulted old medical texts and a woman whose mother was diagnosed in 1939 with the same illness. I didn't want to know how it's treated today. I needed to know how it was diagnosed and treated in 1940. Note: In May 1940 Europe was at war and here there was talk about our country's role in the fighting. Thirteen year old Tommy Duncan is not much interested in that talk. He's more interested in the Brooklyn Dodgers, his team, popular radio programs, and his friend Beth. But problems at home refocus Tommy. While David worked on this book he had the day's newspaper--the 1940 newspaper--sitting on his desk. While writing the book, he felt it was 1940! One night, he came to dinner and asked his wife why there was snow outside. It's May! Renee replied, it might be May for you, but for everyone else it's February. 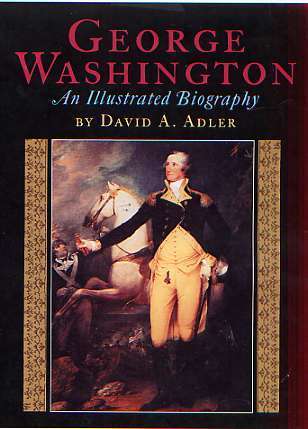 I searched early biographies of Washington, among them some written by his contemporaries.
I worked on the book for two years and in the end felt I really got to know Washington's personality.

This biography begins with Washington's triumphant march from Mount Vernon to New York City in 1789 to take the oath of office as the first President of the United States. In every city he passed through, thousands came out to greet him. On April 30, 1789, Washington took the oath with his hand resting on an open Bible. The Bible passage he chose is very revealing about his feelings on assuming his new office. It's a moving tribute to Washington's approach to government. Later in the book, excerpts from six of his writings (letters, orders to his troops, and his last will and testament) set in chronological order, show Washington's changing attitute toward slavery over the last thirty years of his life -- a telling look at original documents. 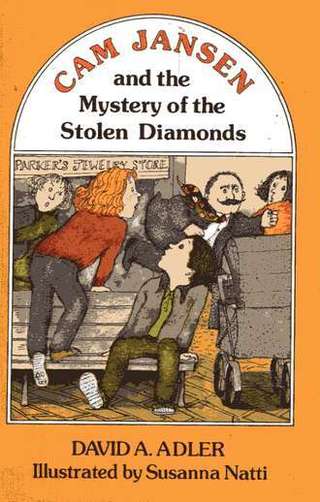 This is the very first Cam Jansen Mystery. Now here's the story behind the book: The idea to write a book about a girl with a photographic memory who solves mysteries came to me from a classmate of mine, a boy, in elementary school who was said to have such a memory. In fact, the first few drafts were not about a girl, but a boy with such a great memory and his nickname was not "Cam," short for the "The Camera," but the name of a famous camera company. The company denied me permission to use its name, so the nickname "Cam" was invented. (That's too bad for the company. Millions of Cam Jansens are already in print all over the world!) My editor asked me to change Cam from a boy to a girl and I readily agreed. -- The first mystery, CAM JANSEN AND THE MYSTERY OF THE STOLEN DIAMONDS -- was inspired by experiences I had while caring for my infant son Michael. It wasn't easy taking him for a walk. I needed to take so much along and that brought me to the clue and the great idea that became my very first Cam. THANK YOU, MICHAEL! 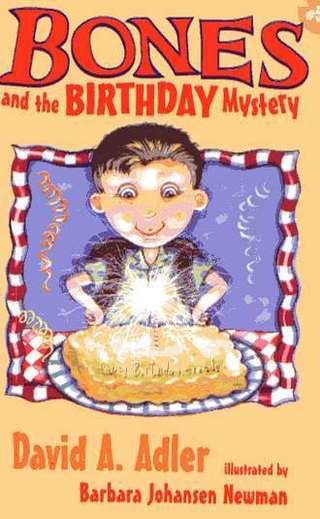 I met Jeffrey Bones while speaking to an audience of more that two hundred elementary school students. I don’t know what triggered my imagination, but I do remember taking an index card from my pocket and while I continued my talk writing a note to myself about this character who says confidently, “Everyone needs Bones.” Jeffrey Bones is that confident, clever part in each of us. He’s fun and I love writing about him. This mystery, is based on something that happened in my house, to me. I don’t want to tell you what that was because that will give away the mystery, but as with all Bones mysteries, the clues are all there for the readers and for Jeffrey Bones. Readers, have fun trying to solve it before Jeffrey does, and have fun reading.

THE PICTURE BOOK BIOGRAPHY QUIZ
WHO SAID IT?


1- She convinced "these people of our friendly intentions."
2- "I'm just a Kansas farmer boy who did his duty."
3- "Genius is one percent inspiration and ninety-nine percent perspiration."
4- "What is this slavery that it can do such dreadful things?"
5"- God spoke to me and called me to His service."
6- "Equal means getting the same thing, at the same time, and in the same place."
7- "If this be treason, make the most of it."
8- "I have made up my mind to go to Texas."
9- "I am longing, so longing for everything . . . to talk, for freedom, for friends, to be alone. And i do so long . . . to cry."
10- "Ask not what your country can do for you--ask what you can do for your country."
answers below 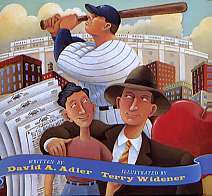 THE BABE AND I
won the 2003 California YOUNG READER MEDAL for its Meritorious contribution to Literature for Young People.
The BABE AND I has also been awarded:
The Bluegrass Award
an Oppenheim Toy Portfolio Gold Award
is a Golden Kite Honor Book

Gertrude Ederle died in November 2003 at the age of 98. AMERICA'S CHAMPION SWIMMER, GERTRUDE EDERLE is the only book length biography of this American heroine. In 1926 her successful swim of the English Channel empowered women. 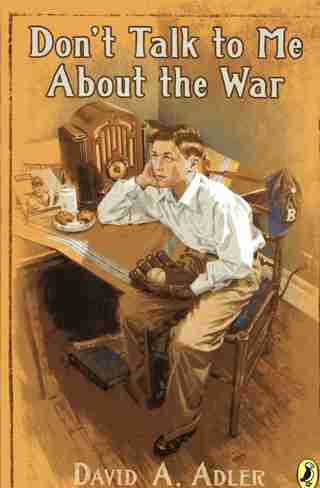 In 1789, when George Washington took the oath of office as the first president of the United Staes, he placed his hand on an open Bible. What page was it open to? Why did he choose that page? What did this mean for the new nation? To find out read Adler's GEORGE WASHINGTON, new for fall 2004.